To elaborate, consider an 800x480 TFT display with a 24-bit RGB parallel interface. This size display would have a typical clock frequency requirement of about 31MHz. This is how often the 24-bits of data will be transmitted to the display. Clock frequency is calculated as follows:

The clock would need to be provided from the microcontroller as an input signal to the display. As well as a horizontal sync parameter for every row of pixels (including the timing porch parameters) and a vertical sync for every frame at a refresh rate of about 60Hz. Depending on the display there could also be a “data enable” signal, triggered for each set of active data. For reference the ATmega AVR controller common in the Arduino Uno has a typical frequency of 8-16MHz and therefor would be incompatible for the RGB parallel interface.

The minimum memory needed to display one frame of pixels is known as the frame buffer. The frame buffer is calculated by the resolution and the color depth used for the display. The color depth is how many bits are transmitted per pixel, commonly abbreviated as bpp. In continuation with the example, suppose the display is set to use all 24 data lines to send 24-bits of RGB data per pixel. This is known as RGB888 (8bits R, 8bits B, 8bit G) and has a color range of 16.7M colors. The calculation of the frame buffer would be as follows:

This is the amount of memory needed for a full frame of pixels. The frame buffer is usually stored in SRAM and for reference the Arduino AVR mentioned previously only provides 2kB of SRAM. It is important to note that the displays built in controller IC will sometimes offer internal SRAM provided for the frame buffer. It is necessary to check the specification sheet of the IC of the display to verify if this memory is offered.

To simplify the incompatibility, AVR controllers transmit data in 8-bit increments while the 24-bit RGB DPI requires 24-bits of RGB data to be transmitted per clock sequence. Alternative approaches for the RGB parallel interface would be to use a more powerful controller or to add a graphics controller chip.

This chip does offer a PLL clock frequency multiplier; however, it is not capable of producing a pixel clock frequency that supports 24-bpp at a resolution of 800x480 pixels. In addition, this chip offers 768kB of RAM for the frame buffer which is insufficient for the current example. This controller would be better suited for a display with lower resolution or a display that is set to a lower color depth such as RGB565 (16-bpp). 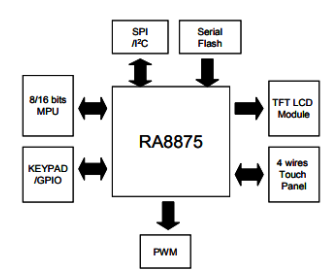 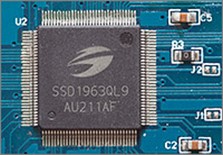 A different option for the RGB parallel interface is to use the LT8619b chip which communicates with the displays over an HDMI interface. This chip supports up to 24-bit color depth and up to 4k resolution. This controller is offered by Focus LCDs on the HDMI module boards available on our website, FocusLCDs.com. These chips are compatible with two interfaces, RGB parallel and LVDS. This would be a good choice if using a single board computer or a processor with a HDMI connection port. 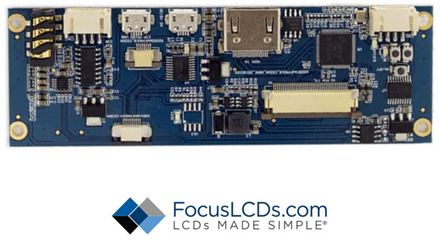 This interface has low voltage differential signaling for high speed data transmission. The LVDS interface is a common connection type for laptop computers. The LVDS interface transmits data at a rate of 100Mb/s and requires a special functioning chip to generate these clocking signals. Most single board computers or devices with a LVDS port available will have a graphics controller capable of transmitting LVDS data.

A common LVDS driver is the LT8619b controller made by Lontium. This controller offers the transmission of LVDS data through the HDMI interface. This makes connection to the CPU simple through a single cable. This controller supports the LVDS communication up to 1080 pixels to maintain a refresh rate of 60Hz. This controller would be incompatible with resolutions greater than 1080p. Additionally, this board offers an audio output. There are similar graphics controllers from Lontium in this series that offer different input interfaces.

Another LVDS controller is RTD2660 from Realtek which outputs both RGB and LVDS timing signals. This controller can communicate the signals required for the LVDS interface over an HDMI or VGA input. This controller supports resolutions of 1024x600 and 800x480 and the firmware can be programmed and changed for common development boards. Similar Realtek driver boards offer LVDS control with and without audio and at different resolutions. 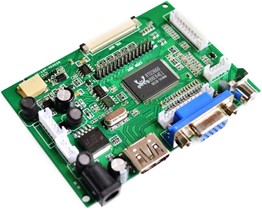 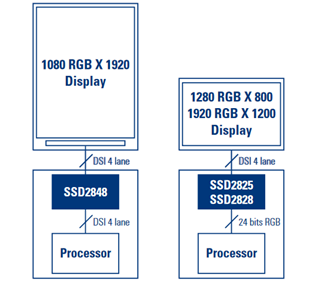 High speed interfaces are desirable for applications with high resolution and high-speed data transfer. It often becomes necessary to support the microcontroller with a chip specifically designed for this task. This makes programming and timing the interface easier through a lower frequency interface to indicate the specifications of the display. This note offers only a few examples of high-speed interface graphics controllers. There are many graphics controllers available that can meet the demands of these interfaces.

Additionally, it is always important to check the capabilities of the internal IC of the display. Some displays will offer internal memory for the frame buffer or an internal oscillator to meet these requirements. These features will be described in the specification sheet of the displays controller which are available on FocusLCDs.com for each of the displays available.