An Introduction Into LEDs

LEDs (Light-Emitting Diodes) are a simple technology, manufactured with low expense, semiconductor materials that dissipate excess energy in the form of light. Unlike the case with other materials used for lighting that lose a large percentage of their energy in the form of heat. Most other lighting technologies are very inefficient compared to light emitting diodes.


LEDs have been used in LCDs for over 25 years, but only recently was it possible to produce the colors yellow and red in mass production.

The colors are used in various devices such as car headlights, traffic lights, and residential lamps, among other applications. LEDs have several advantages such as: low power consumption, very high durability, ability to operate in a wide range of temperatures and they are free of heavy metals. Their construction contributes very little to pollution, making them one of the first green technologies used in the manufacturing of Liquid Crystal Modules.

LED technology has been used extensively in the lighting industry. The price of LED lamps is a little more expensive than that of conventional bulbs, but the energy savings and the durability provided easily justify this investment. The half-life of LEDs are rated at 70,000 hours while the fluorescent models last on average 10,000 hours.

Excessively high temperatures can greatly reduce the amount of half-life of many LED applications.

The LED lamp is extremely efficient and in terms of lighting technology: it is a solid state light source. This means that each LED has a block of semiconductor material that does the actual work of producing light.

Solid state devices mean that there are no moving or vibrating components that could wear out or break. This is different than incandescent and fluorescent lamps that emit light by electron excitation in other elements, filaments or mercury vapor, which vibrate when current (amperage) passes through them.

By eliminating the vibration, LEDs have achieved a longer half-life. This is one reason why LED technology is used in the majority of LCD applications that need some type of backlighting. LEDs operate well in high vibration environments. The shaking of the solid state component does not shorten its half-life.

Vibration was one major issue that led to the elimination of CCFL (Cold Cathode Fluorescent Light) backlights in larger LCD technologies such as Character and graphic displays.

In the past, LEDs were not used in larger LCDs since they tended to produce hot and cold spots. But advances in diffuser technology have eliminated most issues with uneven lighting.

The LED uses the majority of its energy in the production of light and not in heat or noise.

Older lighting technology produce a great deal of heat, even to the point that the light cannot be touched while in operation and may need to be off for a few minutes before it is safe to remove.

Also, LEDs do not produce noise pollution such as older neon lighting technology.

Some LED products claim to save as must as 60% more energy than older technologies while still producing the same amount of light.

Some older lamps can produce infrared and ultraviolet radiation that attracts insects and fades certain surfaces such as paintings. LEDs are free of all these negative effects.

Older lighting technologies, such as EL (Electroluminescence) and CCFL require an AC (Alternating Current) signal to operate. This AC signal can interfere with neighboring circuits and requires the product to contain an inverter to convert the DC (Direct Current) current to AC.

EL and CCFL also suffer from a shorter half-life of 3K hours compared to 70K hours of a LED.

The LED is a simple semiconductor typically composed of aluminum gallium arsenide (AlGaAs) which is doped with other materials to define colors.

When phosphorus is doped, the emission may be red or yellow according to the concentration. Using gallium phosphide with nitrogen doping, the emitted light can be green or yellow.

Note: Yellow/Green LED backlights are the most popular color incorporated with character LCD Modules, although this color combination is losing ground to blue and white.

With the use of other materials added to the mix, the results are LEDs that emit light blue, violet and ultraviolet up. There are also white LEDs, but these are blue-emitting LEDs coated with a phosphor layer which absorbs blue light and emits white light.

Note: Blue and White LEDs are a newer technology and have grown in popularity with LCDs that operate in  negative mode. 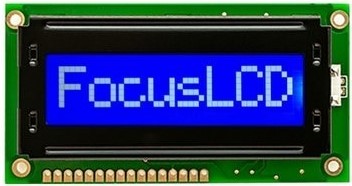 The emitted light is monochrome (single color) and is therefore dependent on the crystal and doping impurity with which the component is manufactured.

Use of LEDs in Liquid Crystal Displays

A common use current of LED technology is in building of such products as TV sets, cell phones, watches, monitors, calculators and everything else that requires information to be displayed to the end user.

In the case of TVs, the advantages of LCDs compared to nearly extinct CRT (cathode ray tube, a vacuum tube containing one or more electron guns, and used to view images) monitors are numerous.

Note: CRTs use a vacuum tube that contains one or multiple electron guns to project on a fluorescent screen. The images are displayed on the screen and can sometimes be visible for a few seconds after the CRT is turned off.

CRT’s also had the habit of ‘burning’ the screen. This is where an image, if left on the screen too long, would burn into the glass. The image could be seen when the power was off and would sometimes distort the live image on the screen.

One solution to eliminate the CRT burn was to use a screen saver that changed the images every few seconds.

The size difference (thickness) between CRT and LCD is most noticeable since even in the early development of the technology, an LCD panel rarely exceeded 3.5 cm thick while CRT ray guns required large and heavy enclosures. Sometimes eighteen inches to two feet thick.

During the operation of the LCD, there is no emission of any harmful electromagnetic wave to create health concerns. And the average half-life can reach 70,000 hours of use - the equivalent of 2500 days or just over six years running.

If you manage to reach the half-life of your LCD TV, you need to get out and get a life.

Note: Books have no half-life and require ultra-lower power to operate.

In LED TVs, the operation is quite simple. They use as a light source from a board containing hundreds of RGB (Red, Green, Blue) LEDs. The RGB LEDs are modulated to produce a wide range of colors.

Many TFT displays can generate up to 64M colors from the RGB combination.

Some TVs use one of two types of backlight, which are called Edge-lit (side-lit) and local dimming (Lighting spot reduction). Edge-lit has LEDs in continuous strips across monitor area, which produces much thinner televisions and achieves 30% lower power consumption.

Newer LED TVs are much brighter, with higher contrast compared to the traditional LCD model.

In Plasma TV technology, the screen that you see is a compound constructed with two thin glass plates. Between these plates are a number of electrodes that receive the decoded video signals and display accurately.

As in Plasma screen technology, the LCD screen uses two thin glass plates placed side by side. The space between them is filled with a very specific liquid crystal solution which aims to function as a kind of curtain that allows the regulating of manner in which light is diffused through it. The formation of an image starts when an electric pulse is applied to each of pixels composed of liquid crystals. At the same time, a non-polarized light is emitted towards the bottom panel and pass through the liquid which polarizer can be produce several distinct colors.

How to Choose Your Backlight for a Custom LCD:

A majority of new LCD designs requiring a backlight use LEDs. If you need a display that is as thin (in the Z direction) as an LCD with an EL backlight, it is possible to use LEDs arranged as a side-lit (or edge lit). The diffuser will allow a nice even light flow.

In the last few years, several LCD suppliers and display manufactures have ceased to exist or have stopped production on LCDs. Suppliers include: Ocular LCDs and Standish displays.

Focus Displays is able to design and supply many LCDs to replace your discontinued LCD supplier.

If need Focus Displays, can still build a replacement display containing an EL backlight, but there is a MOQ (Minimum order Quantity) of 500 to 1K displays. If you do require an EL backlight, we will need to know if you need us to supply the inverter or if this will be on your PCB.

Focus Displays does offer a wide selection of low-priced, standard LCD displays with inventory located in Chandler, Arizona. For help in choosing the best technology, contact us at <www.FocusLCDs.com> or 480-503-4295.