Graphic LCD displays, also referred to as a monochrome graphics lcd displays or dot matrix LCD displays, have been in use for several years. The technology is older than current cutting edge displays but it is by no means becoming a ‘Legacy’ type of display. In fact, look for this display to increase in popularity. Graphic LCD displays do not offer color options such as a TFT (Thin Film Transistor) or OLED (Organic light emitting diodes). They display graphics in one color and require less power to operate.

What Are Graphic LCD Displays?

A Graphic LCD display is just as its name implies. This LCD module is able to display images, letters and numbers that are generated through the customer’s software.

Dot Matrix displays are identified by two sets of numbers. An example of this is a 128 x 64. This display contains 128 dots along the X axis, or horizontal, and 64 dots along the Y axis or Vertical. Each of these dots, sometimes referred to as a pixel, can be turned ON and OFF independently of each other. The customer makes use of software to tell each dot when to turn ON and OFF. This is similar to the old ‘light bright’ toy.

What are some of the markets that make use of Graphic LCD Displays? 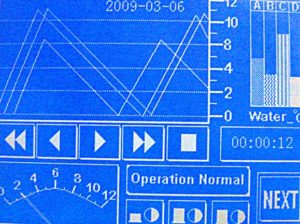 Any application that needs to display more than just letters and numbers can make use of a Graphic LCD display. A crane manufacture provides a display that shows the position of the crane’s boom as it moves from ground level to full extension.

Gas pumps making use of a Graphic LCD Display are able to display more than just gallons or total dollars. They can now display advertising and weather reports and you can enter your zip code, select payment type and even obtain a receipt through the touch screen interface attached to the glass of the display.

The three types of fluid that are available for use in a Graphic LCD Display is FSTN, STN and TN. Though TN (Twisted nematic display) and STN (Super-twisted nematic display) are rarely used on Graphic LCD Display. The primary reason is that FSTN (Film compensated Super Twisted Nematic) offers a wider viewing angle and a shaper contrast. It is possible to substitute STN or even TN for FSTN to save cost, but the lower performance rarely justifies the cost savings.

The backlight is what sits behind the glass to light up the display when ambient conditions make it difficult to read. The most common type of backlight is a LED (light-emitting diode). LED’s offer a very long life time and does not produce electrical interference that is common with CCFL and EL backlights.

If the size of the display is small enough, the LCD display manufacturer may make use of a side-lit instead of a backlight. Side lit displays offer the advantage of being thinner. Side lit backlights do not work well for a large size glass since it will create hot spots (bright and dim areas) on the display.

CCFL is an excellent backlight for large size displays. It provides a more even light flow and is thinner than LED’s. The drawback is the availability of CCFL backlights. They are pretty much non-existent for monochrome Graphic LCD Displays. You may be able to locate a supplier, but the MOQ (Minimum Order Quantity) of this backlight is in the thousands. CCFL’s also produce electrical noise that may interfere with adjacent circuits.

When designing Graphic LCD Displays for a new project, check to make sure the LCD controller driver is still in production.