If you’re starting a new design for an OEM product and want to choose a popular LCD, one that is always in stock, has low-power consumption, and will be available for the life of your product, I would suggest a character LCD.

When ordering a character LCD for your new design, there are several factors involved that should be considered in determining the best features for your product.  Below is a breakdown of the most popular character LCD configuration with explanations for each option. 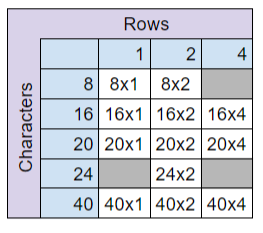 Below are the most common standard character configurations.

It is possible to custom build a unique combination such as a 12x4 or a 16x12. This would be considered a custom LCD and would require a one-time NRE tooling cost and possibly a higher MOQ (minimum order quantity).

There are two voltages supplied to a monochrome (single color) display, such as a character or segment display. The first voltage is the VL or logic voltage. This is the voltage that drives the LCD alone and not the LED backlight.

5V is currently the most common voltage, but lower voltage 3.3V displays are increasing in popularity. This can be attributed to the fact that two AA batteries can generate 3.3V, and many products are beginning to use AA batteries as a power source.

If power conservation is not an issue, we suggest the 5V version because its performance is superior to 3.3V in colder temperatures.

There is no lead-time difference between 5V and 3.3V.

LED voltage is independent of VL, although it is possible to power your LED from the VL supply, we do not recommend it. If the engineer chooses 5V for logic voltage, they will also choose 5V for the LED voltage.

Note: it's not the voltage that drains batteries, it is the current. LEDs draw from 15mA up to 100mA, depending on the number and brightness of the LEDs.

All monochrome displays contain a nematic fluid trapped between two layers of glass. The fluid rotates when power is applied and either blocks or allows light to pass through.

The most common fluid type is STN (Super Twisted Nematic). It provides a wide viewing angle at an affordable cost.

FSTN (Film Super Twisted Nematic) is a step up from STN and contains a retardation film applied to the glass to produce a black and white display. This film produces a higher contrast and wider viewing angle, than STN at a slightly higher cost.

TN (Twisted Nematic) is the step down from STN and saves about 5% in cost. It wont provide as wide of a viewing angle as STN and FSTN, but it has a faster response time and superior performance over the two as temperatures drop below -20C.

Character LCD modules are available in two temperature ranges: normal (for indoor use) and extended/wide (for outdoor use). A wide temperature range will continue to operate as temperatures near -30C. The cost for a wide range temperature fluid runs 3% higher than normal temperature. In most cases, if the cost is not critical, we recommend that you incorporate the wider temperature version.

If your display needs to operate at a temperature lower than -30C, a heater can be integrated. The addition of a heater draws further power and, in some cases, requires a one-time tooling fee.

Note: If the display is operating as the temperature decreases below -20C, the display tends to continue to function. If you turn on the display at its lowest temperature, it may not turn on until warmed up.

Positive mode character displays produce dark letters on a light-colored background. This is the most common and lowest power option. The display can be read with or without the backlight on and is sunlight readable.

Negative mode character displays produce light colored characters on a dark background. The backlight must be on for the display to be readable and does not perform well in direct sunlight.

LCDs are available in either option although almost all sample stock consists of positive mode units.

LEDs are used as backlights that sit behind the rear piece of LCD glass and are available in several popular colors, including: yellow/green, bluem pure greenn, white, red, RGB (red/green/blue), and many others.

If the color you want is not in stock, order a yellow/green sample for your development and we will ship the display with the color of your choosing as soon as it is built.

Note: LED backlights are the only option on monochrome displays for new designs. EL(electroluminescent) backlight technology is not recommended and has fallen out of favor due to their short half-life of 3K hours, the need for an AC signal, and the EM noise they generate.

LED side lit (aka edge lit) offers close to the same thickness as the older EL technology and will operate on a DC signal, but may produce hot spots.

A transflective polarizer is the most popular option since it allows the display to be read with or without the LED backlight on. Advantages to reflective and transmissive polarizers are explained below.

Transflective is a hybrid of reflective and transmissive. It works well in direct sunlight and allows a backlight for readability at night. If you dont know which way to go, choose transflective. There is no difference in price or lead time between these three options.

As its name suggests, this polarizer is basically a mirror that reflects 100% of sunlight, making it the lower power option and best choice for sunlight readable displays.

If the display needs to be readable in the dark, the standard backlight (which is where the LEDs sit behind the bottom piece of glass) will not work, but a side-lit LED can be used. The LEDs sit above the bottom layer of glass and parallel to the fluid. The challenge is the potential for hot spots near the edges of the LCD glass where the LEDs are located. The larger the character LCD, the further the light must travel which produces a dark center. A diffuser (think of a lamp shade) can greatly reduce hot spots.

Note: White LEDs are very bright and tend to create hot spots on a side lit module.

Transmissive displays will only work when the backlight is on. If dark, the display is difficult, if not impossible to read. Transmissive allows 100% of the backlight to shine through the front glass, thereby producing the brightest display. However, it will not reflect any sunlight, making the display difficult to read in sunlight.

The transmissive option requires the most power since the backlight must be on. The backlight can draw between 15mA up to 100mA.

Six o' clock (6:00) or the bottom view is the most common viewing angle for monochrome displays.

The most common construction of the alphanumeric LCD is known as a COB or Chip On Board. The phrase "chip on board" means that the controller/driver chip is located on the back of the printed circuit board (PCB). This type of LCD module handles vibration very well, and the mounting holes located on the PCB allow for an easy method of attaching the LCD to a product.

There are three popular interfaces for character LCDs with 8-bit parallel being the most popular and lowest cost. Many engineers will only use 4 of the 8 bits if they are low on I/O's (In/Outs)

Other options are SPI and I2C.

SPI (Serial Peripheral Interface) is gaining in popularity since it requires less I/Os. They are a bit more expensive than the 8-bit, but for many designs, the extra cost is acceptable.

I2C (Inter-Integrated Circuit) is possible, but this would be a special customer order. I2C has gained much less popularity when compared to SPI.